Welcome to the OC (b1tch)

June 30, 2017
Does anyone else remember that line from the OC? More to the point, am I showing my age? Anyway, my brother lives in Orange County and he is whom we would be staying with in that neck of the woods.

If one of you readers do remember the now defunct show The OC, then you'll remember that it was filled with drama and a lot of rich people. Suffice to say when we were in the OC, there were lots of high end cars there like Porsches, BMWs, Mercedez-Benzs and even a Lamborghini or Tesla or two. Plus, there was an area we passed by where people parked their yachts outside their houses. I kid you not.

However what I want to showcase in this post is the food! Unfortunately I barely remember some of the other restaurants we ate in except for Slapfish.

So in Slapfish, you definitely have to try the lobster roll. I should have placed some hot sauce on mine but it was definitely flavorful. We also got some chowder fries because who wouldn't want to try clam chowder poured over french fries?!


In LA, my cousin took us to Veggie Grill where there is no meat in the menu at all. However they are able to really "fake" the taste and feel of the meat. For example, hubby had a veggie burger that looked like a steak burger and even really tasted like steak. My bbq chicken make look chicken shaped but when I tasted it, it really tasted like chicken! Also when I sliced it, it looked like the same texture as real chicken. We were really shocked. Someone should bring this to Manila.

On our off day, my brother kept bragging about this Southern Fried chicken he tried that was so super delicious. So we went there to try it and the portions were huge! Of course what we couldn't finish we just decided to take home. The chicken was crispy enough but taste wise I will always opt for Jollibee chicken joy or Pancake House pan chicken. 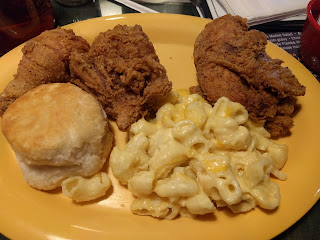 My brother also brought us around to the Saks on 9th and Nordstrom Rack stores where I was able to get a lot of sale items. For dinner we opted for the nearby Boudin Bakery where I got half a grilled cheese and the clam chowder. Sadly, the grilled cheese was good but the chowder didn't stand out.


Lastly, is this ramen place my brother brought us to because it was rated highly on Yelp and he wanted comfort food in the rainy weather. I had the curry soba and it was good. Not quite as spicy as I'd hope for something with curry in it but the taste was there. The other picture is the normal ramen that J got. 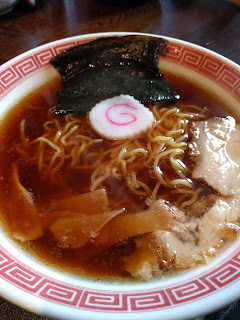 So that's the last of my OC food ramblings. Next on my list will be our two days in Disneyland, our Paso Roble wine tasting and the Discovery Cube LA. I'll probably also do a Sephora haul post because me = make-up addict.