Showing posts from September, 2010
Show all

The Great Asian Secrets Giveaway: P40,000 worth of prizes! 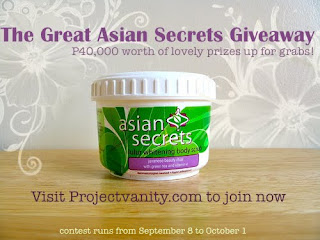 Liz of Project Vanity is holding an amazing contest for all us lovely females. This is the Great Asian Secrets Giveaway. See the mechanics below.
Contest mechanics
1. Simply answer this question!
For the brides: The big day draws near and you have to look perfect. How do you plan to look your best? You're encouraged to talk about your gown, makeup artist, desired look, motif, beauty rituals, and how Asian Secrets can help you on your big day.
For the general readers: What are your beauty secrets? You're encouraged to talk about the beauty products, tips, tricks that you swear by, plus how Asian Secrets can be incorporated in your routine.
2. Blog your answer, post it as a note on Facebook, Twitter, and Plurk it. Don't forget to include four things: your answer to the question, the contest poster, mechanics, and link to the contest page. For Twitter and Plurk entries, include the hashtag #asiansecrets.
3. Post all the direct links of your entries in the comments page (http://bit.…
Post a Comment
Read more 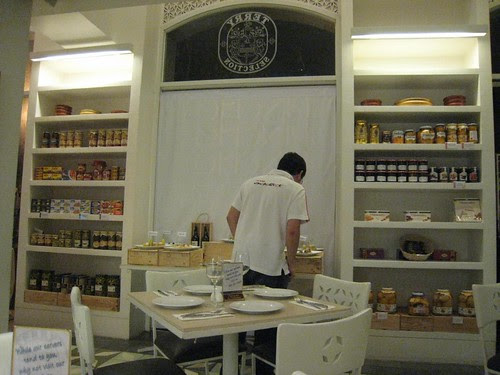 Sorry for not updating my blog in some time. If I don't get really good pictures of the food I'm eating I rarely want to post it for the world to see. I've actually got a backlog of blog posts I want to do but without good pictures I am hesitant to write them.

Anyway, I finally remembered to bring my camera when I go out and got some good pictures of the food I ate at Terry's Selection in Salcedo Village. The first branch of Terry's that I tried was the one in Podium in the basement and this new one is quite unassuming as well. In fact if you weren't really looking for it you might even pass the restaurant since the signage is so low-key.

Once you step in you find yourself in a mix of a restaurant and a deli. There are shelves containing some of the food items that Terry's sells as well as a ref in the side containing some frozen items.

On the other side of the nook is the display for some cheese and sausages.